The state of Washington offers a wide variety of opportunities for hang glider and paraglider pilots of all skill levels, from gentle consistent ridge soaring to world-class cross-country flying.

Geographically, the state is divided into two major regions by the Cascade mountains. To the west of the mountains (often called “Western Washington”) the climate is dominated by marine influences from the Pacific Ocean and Puget Sound. As a result, the weather is mild and wet, giving rise to gentle thermals, relatively low cloudbase and large forested areas. Washington’s major population center, the Seattle-Tacoma-Everett area, lies between the east side of Puget Sound and the western slopes of the Cascades. There are several mountain sites in the Puget Sound region, mostly in the Cascade foothills.

Larry and a tandem student at Dog 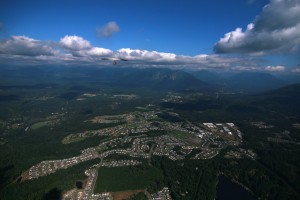 The most popular Seattle-area site is Tiger Mountain, which has been the starting point for many XC hang glider flights in the 10-100 mile range.